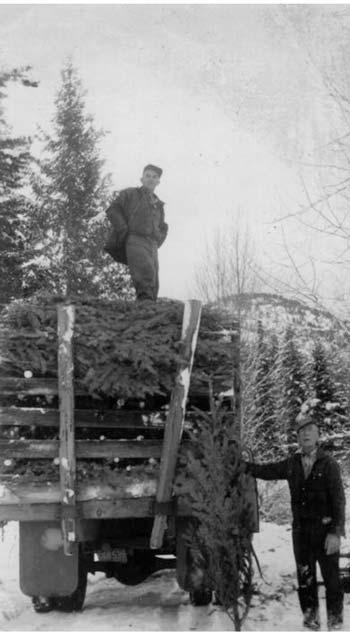 History Ready-cut real Christmas trees are already starting to show up in front of local stores. That means we’re also already hearing the comment, “When I was a kid, we never bought a Christmas tree! We went out into the woods and cut our own!” Well, I know quite a few people who still do that. But recently I stumbled across a newspaper Money Doesn’t Grow On Trees…

Except at Christmas photo that made me realise: this “newfangled” thing of buying live Christmas trees isn’t nearly as “new” as we might think. “The picture to the right shows a truckload of Christmas trees leaving the Lions ranch at Lister for shipment. Reading from left to right are Jack Zachodnik, Ingvar Wilson, and Frank Ingham. The load contained 1,285 trees and will be shipped to the Hofert Company.”

That photo, taken by local photographer Gunnar Larsen, was published in the Creston Review in 1951. Just as an aside: I think the article probably refers to the “Lyons Ranch,” but it was spelled with an “i” in the original article so I left it as is. But let us not get too caught up with spelling and focus on the really interesting part of the caption: the “Hofert Company” it refers to. A brief consultation with Dr. Google led me to a number of newspaper articles, including one in the Lethbridge Herald of 25 October 1951. It picked up a story from Cranbrook: “Christmas Tree Harvest Gets Under way In Cranbrook Area.” “Christmas tree harvest by farmers and operators of special permits has started,” the article reads, “though weather continues wet and mild in opposition to the ideal conditions. Volume is expected to be about the same as last year and considerably below the bonanza million tree cut of 1949.”

The Herald article then explained that J. Hofert Ltd., which was purchasing most of these trees, was “the world’s largest Christmas tree company.” It went on to outline the scope of the company’s operations in the East Kootenay, and concluded with this gem: “Public opinion was violently opposed to the harvest when this branch of the industry was introduced about 10 years ago, but with carrying out of selective cutting and year-round cultivation of bushland, it is now recognized as an annual crop.” So just how long have companies been selling Christmas trees? The Herald article might have only been referring to the East Kootenay harvest when it said “ten years ago,” because the industry itself was around a lot earlier than 1941.

John Hofert sold his first batch in December 1880, expanding from one truck load that first year in Minneapolis to a major California-based business serving all of the western US, Michigan, New York, and half of Canada. His major competitor, G.R. Kirk, was selling trees commercially before World War I. By the early 1950s, it was BIG business. Consider the impact it must have had locally: Both companies had offices and baling yards in Cranbrook; Hofert also had baling yards in Lake Windermere and Jaffray. Hofert, at least, had crews working in woodlots throughout the regi