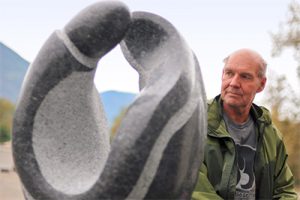 Creston BC sculptor Stewart Steinhauer has worked on a ranch, and he’s been an organic gardener. But to those in the Creston Valley, Stewart Steinhauer is best known for his granite sculptures, which are displayed prominently at the intersection of Northwest and Railway boulevards, adjacent to the Creston Visitor Centre and Kunze Gallery.

Steinhauer is happy to see his work being enjoyed by locals and visitors, just as he appreciates the inspiration the area provides him.

“I find the Creston Valley to be a tremendously stimulating carver’s environment,” says the Creston BC sculptor.

Steinhauer just finished his seventh summer in the valley, where he lives and works on a five-acre corner of Lower Kootenay Band land on the flats. He’s in the process of building a new workshop — greenhouse-inspired to allow natural light inside — but currently uses a Quonset built for a federal government research project in the 1970s.

There the  Creston BC sculptor creates pieces in a range of styles, from three-dimensional to relief artwork, and sizes, from items suitable for a tabletop to the 55,000-pound The Hunter: Seeking Higher Consciousness outside the Kunze Gallery. The vast majority are inspired, often unconsciously, by Steinhauer’s First Nations heritage.

“I make stuff without knowing what it is, and then elders come along and explain it to me,” he says.

In late September, a 17,000-pound eagle in repose, one of his most recent pieces, was delivered to an archaeological site west of Brooks, Alta., where the bird will watch over a 5,000-year-old temple and open-air calendar.

Steinhauer was born in 1952 in northeastern Alberta’s Saddle Lake Cree Nation. He moved to Edmonton in his late teens and to the Okanagan in the 1970s. He leased land from the Okanagan Indian Band and, for 16 years, found success as an organic market gardener, which didn’t generate the respect it does nowadays.

“There was actually a market prejudice against organic,” says Steinhauer. “If you didn’t spray, people didn’t know what you were doing.”

While in the Okanagan, the birth of his first son inspired Steinhauer to begain carving.

“I was present at his birth,” he says. “It was an astonishing moment. It transformed my life.”

The next day, while tending a fire on a cattle ranch near Coldstream, he noticed a root in the flames — and pulled out his knife.

“I was sitting by the fire, really in a daze. I picked up the root, and thought, ‘I want to make something for my child.’ ”

He didn’t stick with wood, though, discovering soapstone when his wife brought home hitchhikers to give them a meal. One was carving soapstone and gave Steinhauer a piece, which Steinhauer then cut into smaller portions to create tiny carvings.

With no grain to fight, as there is with wood, soapstone was more satisfying to carve, and Steinhauer stuck with it through 15 tons, stopping in 2003 when he developed an allergic reaction to the stone, composed primarily of talc.

When Steinhauer was approached by the Saddle Lake Cree Nation in 1992 to create a granite sculpture to be installed at a new school, he jumped right in, without a transition from the softer stone to the significantly harder one. He obtained advice on tools and techniques from a sculptor who worked with Haida carver Bill Reid.

“In short order, everything was in my yard, in Saddle Lake,” he said.

That was when he began receiving help from his higher power, which he calls the Rock Grandfather.

Steinhauer didin’t work with granite again until 2000, but when he did, he felt the need to more deeply study his ancient culture, which encouraged him to keep sculpting.

“Suddenly a door opened, and it was as if I’d been standing and a refrigerator door opened and a feast was laid out.”

He began purchasing 90,000-pound orders, and when he visited the Quebec quarry where the stone originated, he was introduced by a representative as Canada’s top sculptor.

Granite is generally too tough for sculptors to use, prompting many to develop a design, then contract others to carry out their vision, hiring, for example, the best “hand person” or best “clothing person”. Some use machines or create a miniature first, but Steinhauer does neither, giving him “a more direct relationship than that of a linear, rational mind.”

And it gave a close connection with a variety of tools: a hammer and chisel, wet and dry diamond saws, rock drills, a pneumatic carver’s hammer, specialty splitting wedges and diamond polishing euipment.

Even with the tools at hand, creating a sculpture isn’t as simple as ordering a piece of granite and carving it. Prior to two years of carving — which overlapped other sculptures — The Hunter took a year of preparation, including the creation of enough smaller pieces to sell and raise the $200,000 Steinhauer needed up front to order the North and South American granites used in the piece.

Sculpting became more than a way to express his cultural knowledge; it was a form of art therapy for Steinhauer, helping him deal with traumatic events from his past.

“Without realizing it, I’d stumbled on therapy,” he says. “It was a phenomenal healing medicine for me, helping pull me along in a very bleak period.”

His creative side was further sparked upon moving to the Creston Valley. His workshop receives direct sunlight for much of the day, reminding him of a sweat lodge.

“I like the intensity of the heat. … The heats cracks something open in me and creativity comes out as a response.”

While being creative, though, Steinhauer remains aware of practical considerations. With centuries-old sculptures, everything that sticks out — noses, fingers and the like — tends to be broken off, so he has engineered the design of his bears’ ears to be virtually unbreakable, even if not anatomically correct.

Looking to the more immediate future, Steinhauer is planning for the next decade or so. Having spent the first 10 years of sculpting granite learning about his culture, and the second decade working on small- to medium-sized pieces, he has the following 10 years mapped out, and is developing significantly larger projects, with price tags ranging from $750,000-$1 million.

But he won’t forget the importance of smaller works, which allow many art lovers to their own share of his passion and creativity.

“People who know my work love my work,” says Steinhauer. “They know they’re buying something that will be more valuable in the future… and they also know it’s going to be a family heirloom.” •