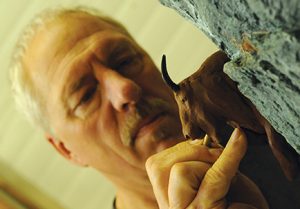 Canyon wildlife sculptor Karl Lansing at work in his studio.

Over the course of nearly 25 years of sculpting, Karl Lansing has taken on a wide range of pieces, from miniature deer to life-sized bison, but a recent project is both bigger and smaller. Bigger, that is, in terms of distinctiveness and smaller, significantly so, in size: the first sculpted coins released by the Royal Canadian Mint.

“These are the first-ever 3D coins created by a mint,” says the Canyon sculptor. “From that perspective, I guess I’m the first guy to have 3D coins minted by a government. … These are one of a kind in the sense that they’re very limited, with only 1,200 of each one.”

The set of five $100 coins started with the release of a grizzly bear in fall, to be followed by a cougar (February), an elk (April), a bighorn sheep (June) and a wolf (September). Made of 99.9-per cent pure silver and plated with gold, the Sculpture of Majestic Canadian Animals series is already popular with collectors, despite each coin’s $999.95 price tag — the grizzly sold out within two days of its release.

The project started when the Mint searched out Lansing and other Canadian wildlife sculptors with the goal of having them bid on the project. Once his bid was approved, Lansing sent a few sketches of each animal to the Mint, which picked the pose it wanted.

Creating the 50-millimetre (1.97-inch) sculptures was a learning curve for Lansing, who typically carves larger pieces.

“The smaller something is, the harder it gets. A nostril is a tiny hole, but it’s still the same shape,” says Lansing, perhaps best known locally for his sasquatch statue in front of the Columbia Brewery.

Rather than perfectly carving a solid block to start, Lansing made a rough sculpture, representing the general shape of the piece. He then made a mould, cast the shape in resin, and then carved and added details, such as muscle and fur, eventually resulting in a master mould and casting that were sent to the Mint.

The process of casting the coins required more technology than Lansing’s usual work. When casting his larger bronze pieces, the molten metal can simply be poured into a mould, but with the coins, the metal was too thick to fill the small openings, so a spin with a centrifuge was needed to pull it inside.

The Mint project is part of a decades-long artistic journey for Lansing, a Creston native who at age 12 started taxidermy, an outgrowth of artistic ability and a love for hunting.

“Taxidermy was just another way to explore creativity,” he says. “It was just a natural thing. You can’t become an artist. … You’re either born with artistic talent or not.”

Taxidermy, he says, is one of the best prerequisites to realistic wildlife sculpture, helping a sculptor to learn about muscle structure and other characteristics that can’t be determined by simply looking at a photo.

“Surgeons don’t learn only from books,” says Lansing. “Before they get to the operating room, they have operated, per se, on many cadavers. … You have to look at it from the inside out.”

The eyes are the key to making the artwork look alive, he adds, and that part of the work is helped by hunting, where he is able to see wildlife in states other than alert, as most is in photos.

After years of taxidermy, Lansing began sculpting in 1992 while in Fernie, where he lived for 22 years before returning to Creston with his wife and their children. While working in Elk Valley coal mines, Lansing had a shift of four days on-four days off, giving him plenty of time to try his hand at a new skill.

His work became popular in galleries, but was labour-intensive, which led the galleries to suggest he begin casting his work to allow pieces to be reproduced multiple times. It also allowed him more leeway in the creative process, with the ability to add material when needed — there’s no room for that sort of error in a carving.

“You start out with a bear and end up with a hummingbird because you can’t fix your mistakes. … I was able to put more time and energy into sculpting and pay more attention to detail.”

Lansing specializes in North American wildlife, with his favourites being bighorn sheep and elk, but has also taken on African wildlife and sporting pieces, such as dogs and pheasants. His work is shown in the Gainsborough Galleries in Calgary, Alta., as well as galleries in Lake Louise, Alta., and Jackson, Wyo., where customers have distinct tastes, with mountain goats and bighorn sheep most popular in Lake Louise.

“I sculpt a lot of grizzly bears, moose and elk for the gallery in Jackson.”

He also makes annual trips to Nevada, for the Safari Club International convention in Las Vegas and the Wild Sheep Foundation convention in Reno.

But the new Royal Canadian Mint coins are something special — a legacy that his children and grandchildren will be able to point to.

“I’ve created something that not only has monetary value, but also has a collectible value.”  •