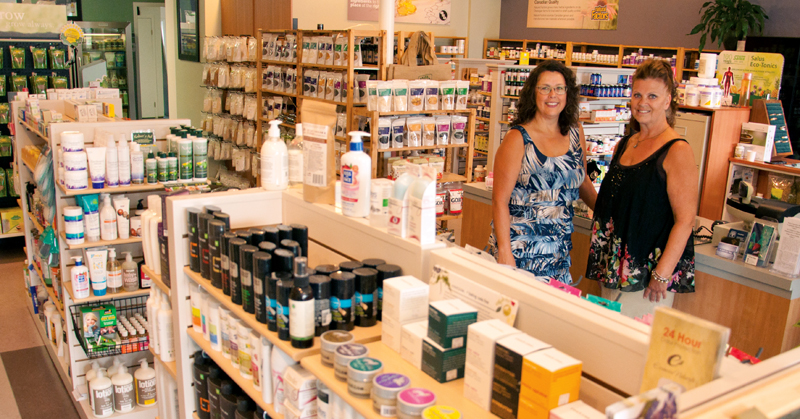 Co-operation took the place of competition after Linda Gigliotti closed her Golden Herb Health Foods in July and joined the team at Jeanna Reed’s Vital Health.

“I was looking for a collaboration of some sort,” says Gigliotti. “A couple of things fell through and then this opportunity was presented to me.”

Both she and Reed had owned their stores for 10 years, with Gigliotti working at Vital Health for 12 years before Reed bought it. But even with the history of competing stores, and with Gigliotti now being Reed’s employee, there was no awkwardness to the transition.

“It felt really comfortable,” says Gigliotti. “We’re finding we have so many similarities. It’s kind of interesting that we merged on different levels. … From the business owner side, I can relate to Jeanna. It’s nice to know we’re on the same page that way.”

“We’re able to tell each other to slow down,” says Reed. “We both have a habit of running around like chickens with our heads cut off.”

Reed had worked in hospitals and home health care after high school, but was an accountant in Alberta’s oil industry when her husband suffered a leg injury. Traditional medicine wasn’t helping, but he started to improve with holistic treatment — taking that path soon led the couple from Grand Prairie, Alta., to Creston when they purchased Vital Health from the previous owners.

Gigliotti had also worked in the more traditional health care industry, but holistic medicine and nutrition better fit her lifestyle — something that many customers agree with.

“The interest of people is growing,” says Gigliotti. “And I feel that clients are growing with the industry.”

To encourage that growth, both encourage customers to educate themselves.

“I’ll hold back products if they’re not sure and tell them to research it for themselves,” says Reed. “A lot of customers will look at the strength and take the higher strength.”

“They don’t know they have to take the right product at the right time,” adds Gigliotti.

Their experience — combined with that of in-store practitioners, including herbalist Maya Skalinska — is a resource that customers can take advantage of, particularly when they’re new to the world of holistic health.

“They’re taking the first step to getting healthy, and looking for a multivitamin,” says Reed. “I often end up directing them to probiotics or fish oils.”

Or, for example, a customer may come in looking for a sleeping pill, but may need to deal with stress or anxiety instead.

“We take them to the root of the problem instead of addressing the symptom,” says Reed.

If customers are looking for a specific product, they will likely find it — from vitamins to soap to food to books, that store is well-stocked, something out-of-town visitors are surprised to discover. A woman who divides her time between Cranbrook and Victoria recently spent nearly two hours in the store.

“She spent three days in Vancouver looking for products that we have all under one roof,” says Reed.

But no matter what reason customers visit, they can be confident that the new team is there to help them as Reed and Gigliotti put their combined experience to good use.

“The main thing is that we really want to be there for customers,” says Reed.

“We’re going to move forward and let changes come to us,” says Gigliotti. •