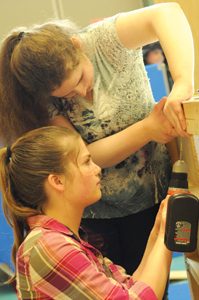 Every Friday morning since February, the sounds of drills, hammers, saws and other tools have been part of the atmosphere at the Creston Education Centre, as Homelinks students created bicycle campers, a project that they will present in the Creston Valley Blossom Festival parade on May 20.

“I’m proud of my kids and I’m proud of the project. I want to show it off and maybe inspire someone else to try it,” says Homelinks teacher Jennifer Adams, who had her students create the campers for art class.

“It’s pretty unique,” says Grade 11 student Ariel Faulks. “I never would have thought about doing something like this for art class. It’s something you can take home and use, not just something to put on the wall.”

Adams, who teaches Grades 8-12 math, science, art and phys ed, stumbled across a Paul Elkins YouTube video on bicycle campers while researching the tiny house movement. The concept fit well with her students — many of which enjoy the outdoors and camping — as well as the work she is doing on her master’s degree in playspace pedagogies and practitioner inquiries.

“I’m working on my master’s and we were asked to challenge ourselves and teach something in a different way that we would normally,” says Adams, who is studying through the University of BC.

The bicycle camper project’s two- to three-hour weekly sessions have involved more than just art. Math skills are also being put to work, as 40 students measure and cut wood, and keep their budgets in check — the latter partly accomplished by using every scrap of wood possible, with names written on some randomly shaped pieces to ensure other teams don’t pilfer them.

“If we had a sheet of plywood, we’d use the scraps so we’d get the most out of our money,” says Faulks, who had previously taken wood shop.

“There’s all this problem solving going on and they don’t even know it,” says Adams.

She researched the bicycle campers in books and online, and brought in volunteers to help the students in areas she couldn’t; invaluable knowledge came from Barbara Koehoorn, whose children Adams teaches, and Koehoorn’s father, Ralph Tressel, who also provided power tools to the class.

“He’s given us the expert advice we need,” says Adams. 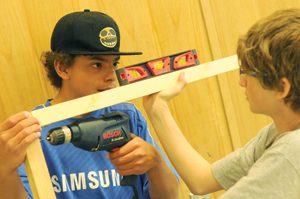 owed the students sample designs and videos, and then let them do their own thing, building both in the classroom and the gymnasium.

“The goal is to give them a chance to learn through trying,” she says. “That’s been a cool experience for me because three groups made mistakes at the beginning. … They had to fix it.”

Even without mistakes, some teams’ plans changed from their initial concepts, which were based on a wooden frame with two wheels, and required to fit a person lying down, have a kitchenette and storage, and fit on the road behind a bike.

“We’ve had to improvise a little,” says Grade 11 student Caleb Gaudio, who has taken two years of shop classes.  “At first, we were going to do a taco, but that idea kind of fizzled out. Then we thought we’d do something different than everybody else and did a round model instead of a square.”

His team’s camper has only one floor, unlike the one built by Faulks’s team of five, which gave theirs a second.

“We were worried about how much space we’d have to lie down,” she says. “So there’s a subfloor.”

For each team, the process involved a bit of compromise. Grade 9 student Marissa Koehoorn and her sister, Kayla, had an idea, as did their two teammates.

“We kind of put them together and built off them,” says Koehoorn, who has done some woodworking with her father.

For her, the project was a great confidence builder.

“I knew how to use most of the tools,” says Koehoorn. “But I learned that we can go ahead with it without asking a parent, which we usually have to do when we’re making something.”

Faulks appreciated learning the budgeting skills, and Gaudio discovered that preparation is a big key to a project’s success.

“I should plan a little more on projects,” he says. “I didn’t plan enough on this one.”

After following the students’ progress — and seeing how many signed up for and stuck with the project — Adams is planning to take the concept a step further in the future.

“Not only has everybody been showing up, but they’re engaged and participating. Doing this project has definitely motivated me to come up with an interdisciplinary project next year,” she says, intending to incorporate more math and computer modelling.

And she couldn’t be happier to see the students not only learning new skills, but also passing them on to the others.

“The coolest thing is when I see a student teaching another student to do something,” she says. “It’s so cool to see that, especially when they’ve just learned it.” 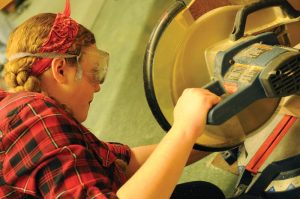