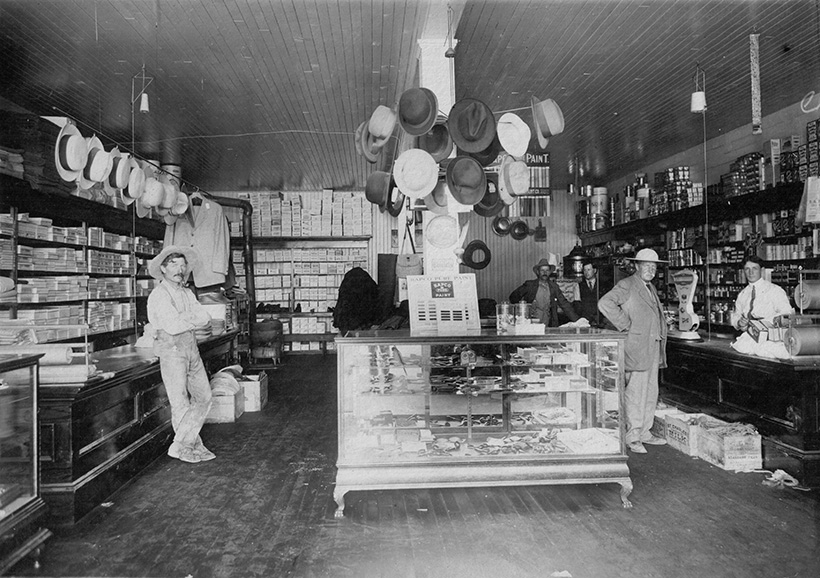 Buying Power: Then and Now

Did you know the Museum is open again? We are: Tuesday to Saturday, 10:00 to 4:00. Moving to an almost-entirely hands-off, self-guided format to meet new social distancing guidelines has meant coming up with all sorts of fun new ways to help you explore the community stories and the objects on display. So we’re preparing a lot of new signage for the exhibits. And the best part of that is: it’s giving us plenty of excuses to dive into research projects…and you know how much I like that!

I’ve been tackling our General Store display. The general stores were not only a source of goods, they also reflected the community’s prosperity and stability; provided an important link to the world through newspapers, telephone exchanges and post office services, and the opportunity to visit with neighbours and acquaintances; and offered additional services for their customers. Bill Crawford, the owner of the Creston Mercantile, was a notary public; Murdoch McLeod, Creston’s favourite travelling optometrist, often set up temporary shop in one store or another.

In many respects, none of that has changed. The types of products sold in a general store hasn’t really changed all that much, either, if you ignore the frozen and prepared foods: the general stores in 1920 sold everything from clothing to groceries, just as Pealow’s does today. Even the brands haven’t changed. You’ll see Rogers and Robin Hood, Nabob and Tetley’s, and half a dozen other modern-day brands represented amongst the tins on the shelves of the Museum’s General Store exhibit.

But what about the prices?

I noted all the prices I could find in 1920 newspaper ads from Mawson’s, S.A. Speers, and the Mercantile in Creston, Butterfield’s store in Wynndel, and even the Creston Fruit Growers Union. Then I took a little field trip across the street to Save-On Foods to do a comparison. That took quite a bit longer than I’d expected – when you’re wandering around a grocery store with a clipboard and encounter people who know you don’t work there, they get really curious. Boy, did we have some interesting conversations about how prices have changed!

This comparison was not as straightforward as it might seem. For one thing, not all 1920 products have a modern-day equivalent. For example, what kind of soap was the Sunlight that sold for 40c a package in 1920? It might have been the cake-style soap, similar to the bars of Ivory we have today (though that’s being rapidly supplanted by liquid soap in pump dispensers), but more likely it was a box of powdered all-purpose soap. The closest equivalent I could find was powdered laundry detergent (also going the way of the dinosaur).

Another challenge is the size. How does one compare the 10-pound pail of Rogers Syrup ($1.75 in 1920) to the 750ml bottle of it today ($5.79)? And sometimes the quantities are so very different as to make any comparison laughable: the only 1920 price I found for potatoes was from Sam Speers, who was selling them for $80 a ton! Who buys a ton of potatoes at a time?

Nevertheless, I did manage to find fairly good comparative prices for forty-three items, ranging from Baked Beans to Vienna Sausage. With a few adjustments to make quantities comparable (dividing the cost of a 98-pound sack of flour, for example, to compare it to the 10kg ones we have today), buying one package or quantity of everything on my list would cost you $25.81 in 1920, and $259.68 today.

That just tells us that prices have increased in the past hundred years – and we knew that already. But how does that compare to wages? Just for fun, while I was at it, I made note of the few mentions of wages and salaries from the 1920 newspapers.

Women and girls “enjoyed” a minimum wage of $12.75 per week, which translates to a daily wage of $2.32, assuming five-and-a-half days per week (Sundays and Wednesday afternoons off, if they worked in retail). At the other end of the scale were railway engineers, who pulled in as much as $250 per month, or more than $8 per day (even more if you factor in days off, but I have no idea what kind of a schedule your typical railway engineer might have worked). Wages for workers in lumber camps ranged from $3.50 to $4.00 per day. If you have a group of one person in each of the eleven occupations I found salary information for, you get an average daily salary of $4.97 – though that would hardly be accurate for the population as a whole, because there would be many lumberjacks and retail clerks and only one, say, superintendent of Camp Lister (who made $200 per month). But, for simplicity’s sake, let’s go with it.

So that list of forty-three grocery items would cost just over five days’ pay in 1920. Today, if we assume $15 per hour for eight hours work, that same shopping list is the equivalent of 2.16 days of work. Mind you, many of the items on that list, like steak sauce, macaroni, or canned salmon, were luxury items in 1920, whereas today they’re more like essentials; and the eggs, milk, ketchup, pickles, and canned peas are things many people would have produced themselves in 1920 instead of buying.

Nevertheless, if this one little snapshot is anything to go by, grocery prices would seem to have dropped compared to wages over the past century. But I don’t think we can say that wages go further today in general. An acre of land in the area around Adam Robertson School sold for as little as $520 in 1920; a quick Google search turned up property values for empty lots today that start at $100,000 per acre and go up rapidly from there. So, a century ago, you could buy an acre for 104 days’ worth of wages; today, you’ll be working for at least 833 days to buy that same lot. And the kind folks over at Kokanee Ford told me that a base-model Ford Fusion will set you back 237 days’ pay ($28,485), whereas the “standard runabout” that Mr. Bevan was advertising at his Ford garage in 1920 was only 143 days’ pay ($710).

To be fair, though, the Fusion has a starter; you’d have to crank the runabout.

The entire list of forty-three price comparisons is now a part of the General Store display at the Creston Museum – come on down to check it out!