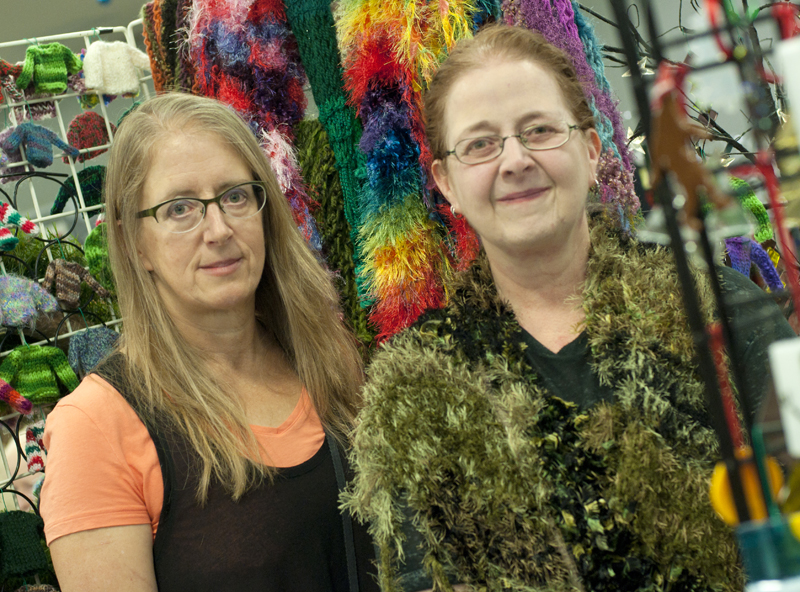 Sarah Miller and Jeanette Stenhouse are sisters who ran a popular downtown business for over three decades, but they have something else in common.

They’re also artists, one working with yarn, the other with glass. The artistic expression is more recent for one of them, though — Stenhouse took art classes in school, while Miller focused on academic subjects, such as chemistry and physics.

“I never tried anything with art, really,” says Miller, who began painting at age 35, before ultimately working with glass.

For both, their recent work includes colourful Christmas ornaments, available at the Arts Garage in Erickson.

They previously ran Wear Withall, a clothing store, with their mother, the late Beth Kastelan, from 1981-2014, closing it a few weeks before its 33rd anniversary.

“When we tell people that, they never say we don’t look old enough,” jokes Miller. 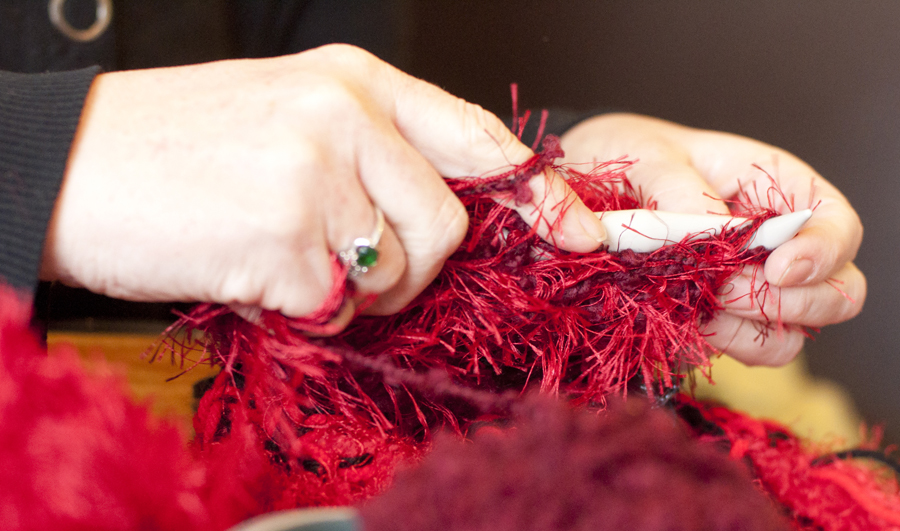 Stenhouse began expressing her artistic side at an early age, taking up knitting around age seven. She enjoyed the hobby, but slowed down until 1986, when she saw a pattern for a peach-coloured sweater with a big collar.

“I thought, ‘I’m going to have to start knitting again,’ ” she says, and she did, even producing 40 sweaters one year to sell at Wear Withall.

In the early 1990s, she decided to take her knitting in a more fun direction, and stopped relying on patterns, doing her own thing instead, but always certain to include a  lot of colour.

“I’ve always been really good at that,” says Stenhouse. “At Wear Withall, it would be, ‘I’ve got earrings that would match your sweater perfectly.’ ”

“I’ve got a drawer full of paint chips that I look at sometimes — the paint chips, not the drawer,” adds Miller.

Stenhouse’s love of colour is evident in her recent work, which includes scarves in every colour of the rainbow — and then some — although she does have a favourite.

“I was looking at yarn today and Marybeth (her daughter) said, ‘You don’t need more green,’ ” she says with a laugh.

It’s ideal, then, that green is a Christmas colour — she’s been hard at work lately making mini sweaters for Christmas ornaments. As well, she’s working on a shawl inspired by a photo, with a lot of her work accompanied by Netflix. 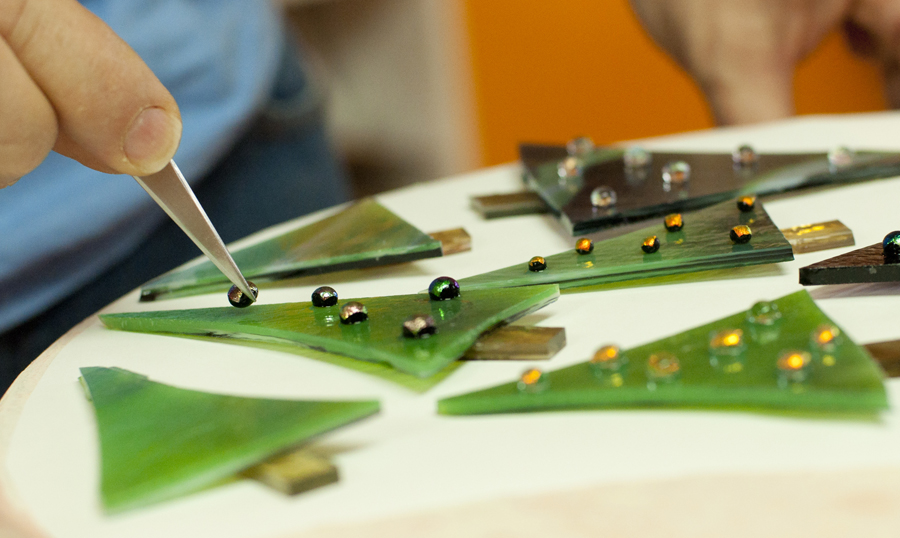 Miller held out until she was 35 before exploring her artistic side, and started painting with acrylics after reading Drawing on the Right Side of the Brain.

She was interested in stained glass, but “I didn’t think I should be operating a blowtorch.” Eventually, she worked up the courage to try it in a class taught by Lorne Eckersley.

“And then, there was no blowtorch,” she says. “I was so disappointed.”

She found it to be a bit like “painting with glass”, and has mainly created 18×20 pieces that take months to produce, and also offer a challenge when creating scenery without following a pattern.

“You don’t want a line going through the sky, so you have to know how you’re going to cut the glass,” she says.

Miller has also made smaller kiln-fused pieces, such as her recent line of Christmas ornaments, which includes presents, the Columbia Brewery’s sasquatch and Christmas trees — the latter complete with tiny glass ornaments.

She’s able to make the smaller pieces much more quickly than the larger ones, but they still offer the same thrill.

“Opening the kiln is very exciting, seeing what might be a completed piece for the first time, holding it up and seeing the light coming through,” says Miller.

And although they don’t always turn out as expected, she always has other options.

Miller and Stenhouse’s work can be found at the Arts Garage gallery and art shop in Erickson. To learn more, visit Sarah Miller Art or Jeanette Stenhouse Knits on Facebook.