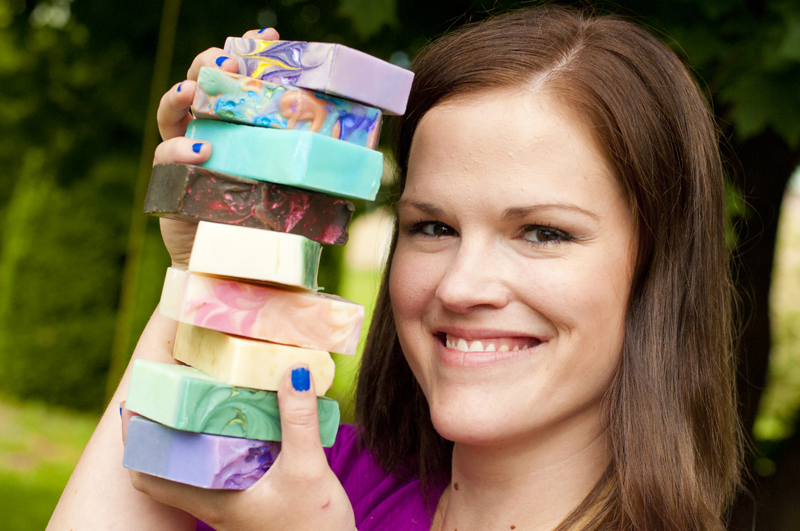 For Kate Webb, making soap is a way of keeping her family safe from harmful ingredients in commercial products, helping to prevent one son’s eczema outbreaks. But the craft has become a passion and obsession, satisfying her scientific inclination.

“I love the mad science part of it. I was a science geek in high school.”

She makes about 100 pounds a week, as well as lotions, body scrubs, face masks, lip balms and hair products, all without the detergents typically used in making commercial beauty products.

Webb learned to make soap locally, taking a course from Rachel Beck (co-owner of Tilia Botanicals) so that she and her mom, Christine Proskow, could create party favours for her brother’s wedding. But she didn’t stop, and soon began offering it at the Creston Valley Farmers’ Market, where she had started selling jewelry in 2009.

“It took over the jewelry side of the farmers’ market because it was huge, and it was addictive,” she says. “It was something to do and stay home, and I didn’t have to spend hundreds on eczema medication.” 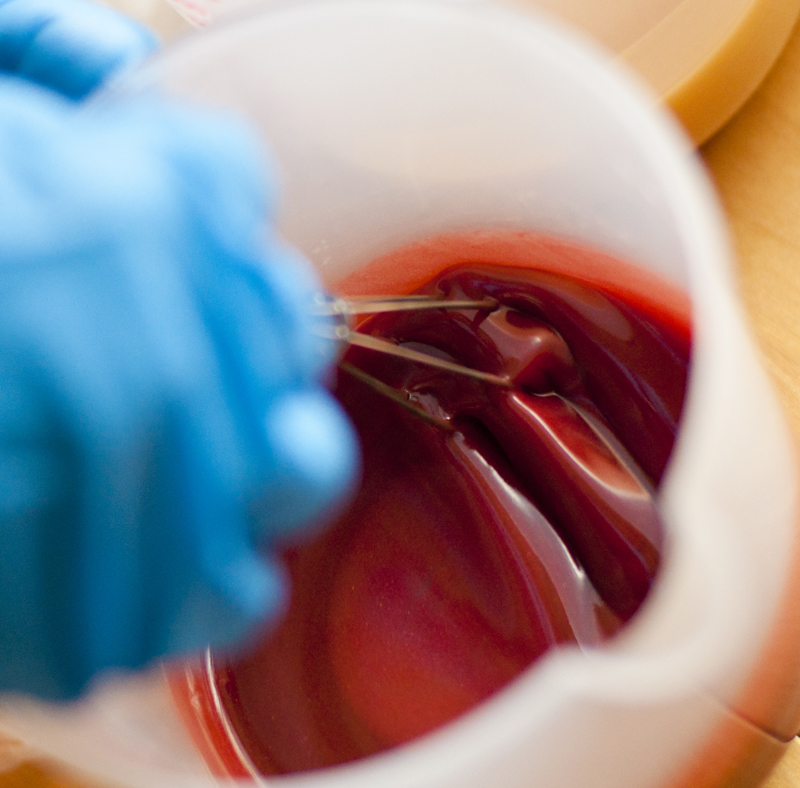 Stirring colour into an oil-lye mixture.

Webb was born in Medicine Hat, Alta., and moved with her family to Creston at age nine. She’s since lived in Edmonton, where she took post-secondary education and met her husband, and Enderby, B.C., with a few years in Creston in between, before returning to Creston over a year ago.

After learning to make soap, the former fitness centre manager looked into various methods before choosing cold process, which involves mixing oils and lye — a formula that has led to misconceptions, including that of soap containing lye being harmful.

“The commercial industry went for years saying, ‘Soap is bad. Our bars are better,’ ” says Webb.

That, of course, grew out of soap being homemade with few calculations used to keep lye at safe levels.

“It often burned, which is what happens with too much lye,” says Webb. “So it got a bad rap.”

In reality, after she pours the oil-lye mixture into a mould and lets it set, the lye evaporates in about 72 hours. Through that chemical process, saponification, the lye changes the composition of the oils to create soap. After that, the bars cure as their moisture evaporates, which can take up to eight months depending on the oils used.

“I will weigh a bar or two out of a batch, and when it stops losing weight, then it’s ready,” says Webb.

Most of her soaps are vegan, containing essential oils from around the world, as well as fair trade shea butter (soaps contain about five per cent and body butters 65 per cent), certified sustainable palm oil and bamboo charcoal.

New mothers will occasionally have Webb produce a small batch using their breast milk — soap lasts almost indefinitely, so it creates an intimate and treasured keepsake.

“It’s kind of a unique way to preserve the bond between mom and baby,” she says. 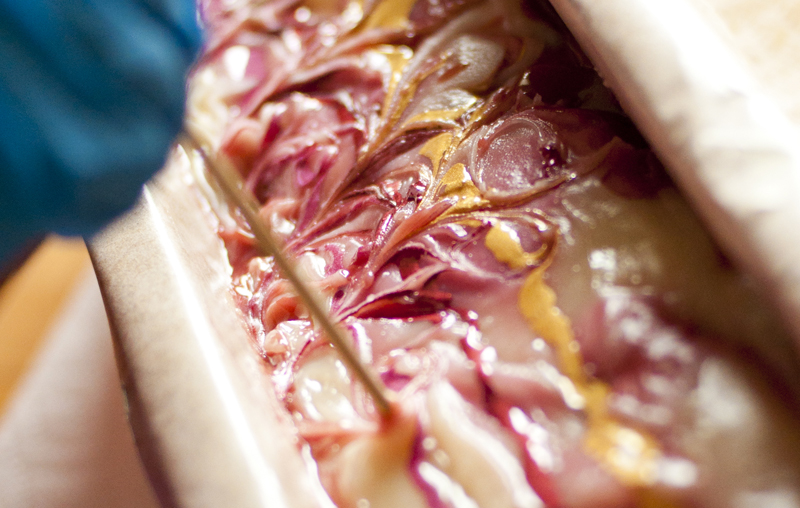 Several colours are swirled together to create bright designs.

She makes about 30 kinds, occasionally experimenting with seasonal scents. Some of the summer bars include cucumber-melon, jasmine and grapefruit-lily. Lilac started out as a seasonal scent, but Webb found she had to add it to the regular lineup.

“It was in such high demand that I couldn’t stop making it,” she says.

Webb tries to follow trends and make products based on customer requests, with ginger-lime popular a few years ago, and a request for anise resulting in an anise-spearmint bar. She’s learned not to be offended when customers are less than fond of specific scents. Rose, for example, is making a comeback, but it’s not a favourite scent for everyone.

“It either smells like your grandmother or a fresh garden,” she says. “And patchouli is very polarizing.”

Of course, not every new scent can be a winner.

“I have boxes of test batches that are just for household use,” Webb says with a laugh.

Occasional misfires aren’t a bad thing, though — artistic expression is another reason Webb got hooked on the process.

“I’m not very artistic but this lets me think that I am,” she says. “I draw stick people — but I can make soap.”

•Yellow Rose Handcrafted Design products are available at the Creston Valley Farmers’ Market in the summer and fall, at the Creston Pop-Up Mall in the winter and year-round at Tigz Designs. Learn more at theyellowrose.ca.