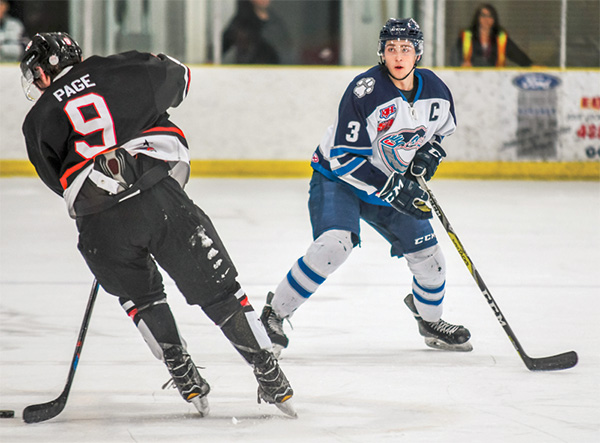 The Creston Valley Thunder Cats playoff run may have been cut short by a March 23 loss to the Kimberley Dynamiters, but the team has a rare post-season opportunity for redemption when the Cyclone Taylor Cup is held at the John Bucyk Arena April 6-9.

“Realistically, it should be the best hockey of the year — we’re talking about three separate league champions battling against each other,” says Thunder Cats head coach Jeff Dubois, speaking by phone from the Lower Mainland, where he’s scouting the Thunder Cats’ potential Cyclone Taylor competition.

Named for Hockey Hall of Famer Fred “Cyclone” Taylor — who led the Vancouver Millionaires to a Stanley Cup victory in 1915 — B.C.’s Junior B hockey tournament will include the champions of the Kootenay International (KIJHL), Vancouver Island and Pacific junior hockey leagues.

As the hosts, the Thunder Cats are allowed to join the competition, and will be ready to compete against them all, says Dubois.

“We feel we are a championship-calibre team. We’re going to have a chance to prove that over four days where we play league champions every day.”

In the regular 2016-2017 season, the Thunder Cats placed second in the KIJHL, handily securing the top spot in the Eddie Mountain Division with 74 points. Six points ahead of them were the Beaver Valley Nitehawks, battling (at press time) in the finals with the Chase Heat for the KIJHL championship.

Dubois was happy with the regular season, and the Thunder Cats started their playoff run well, defeating the Columbia Valley Rockies in the first round.

“Unfortunately, toward the end of the year and especially in that first round against Columbia Valley, we had four or five key players get hurt at the same time,” he says. “So we limped into that series against Kimberley. … Kimberley showed up every night. It would have been nice to play closer to full strength, healthwise.”

The silver lining to their early defeat, however, is that the team gets more recovery and practice time than the other competitors, all of which will be gearing up to play four games in four days, for a total of eight.

The event will offer more than those games, though — it will also have a positive economic benefit for the community.

“As a host community, we have a $90,000 budget that we spend right in the community, providing meals and accommodations for the hockey teams,” says Thunder Cats president Mike Moore.

The Thunder Cats have organized accommodations all over town and meals at seven restaurants for their guests. The organizing committee expects the visiting teams, parents and fans to spend twice the Thunder Cats’ budget, for a total infusion of nearly $300,000 into local businesses.

Visitors can expect to be informed about the community when they arrive — Creston Visitor Centre co-ordinator Amy Maddess will be set up at the arena during the initial parts of the tournament, a bus tour of the valley can be booked, the Town of Creston will host an open house about its fire hall project on April 8 and the Creston Valley Farmers’ Market will be held at the rec centre on April 9. In addition, the Thunder Cats are  hosting an alumni game on April 8, with about 40 players returning to hit the ice (see ad page 13).

Since the competition was awarded to Creston in May 2016, major sponsors have been supporting the tournament, with the Town of Creston and Regional District of Central Kootenay areas A, B and C each donating $2,500. Area C director Larry Binks provided platinum sponsorship, and Area B director Tanya Wall is a gold sponsor, as well as a shoot-to-win sponsor, potentially donating prizes of $5,000 (round robin game), $10,000 (bronze medal game) and $20,000 (gold medal game).

Hosting the event and being guaranteed a spot in the Cyclone Taylor Cup was an asset in recruiting players this season, says Moore, and it will help with the process next season.

“The spinoff at Junior B level hockey is that because kids can try out and pick the teams they want play for, they pick teams that do well. We’re still going to have a fairly high-calibre level of players wanting to come play because we did well last year.”

For the team’s 20-year-olds — who would have otherwise aged out of the league — the competition is a chance to play a bit longer.

“There are guys on our team who simply wouldn’t be here if we weren’t hosting the Cyclone Taylor Cup,” says Dubois.

One of those is Thunder Cats’ captain McConnell Kimmett.

“I’m going out with a bang,” he says. “I always wanted my last game to end with a win and end with a trophy over my head. … This is definitely a once-in-a-lifetime opportunity that I’m excited about.”

Kimmett, who will be heading to university to study chemical engineering, has been looking forward to the Cyclone Taylor Cup all season, and is positive about Creston’s chances.

“We feel pretty confident. We’re going to be the best rested and strongest team there. We’re not an underdog.”

“It’s a lot different than going through league playoffs where you don’t know who you’re going to get round to round,” says Dubois. “We know who we’re playing, and we’ll have seen all the teams play. Then we’ll have a couple of weeks as a group to prepare for each of those opponents and tailor our game plan knowing who’s coming into Creston.”

Dubois looks forward to showing locals and visitors alike that the Thunder Cats can keep up with B.C.’s best team.

“Right down through our lineup, and for us as coaches, it’s a special opportunity to play big games in front of home fans, to play every game against league champions,” he says.

And crowds won’t be disappointed.

“They can expect the best hockey that’s ever been played in the Johnny Bucyk Arena,” says Kimmett. “There are going to be three championship teams and us going head-to-head every day. It’s going to be very intense hockey.” •