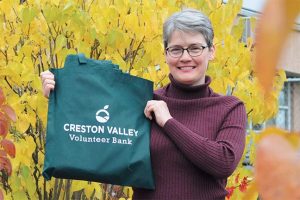 Eileen Fitzpatrick is the co-ordinator of the Creston Valley Volunteer Bank.

“The lifeblood of Creston is its volunteer base,” says Eileen Fitzpatrick. “Most things that happen in town couldn’t be done without volunteers.”

Few will argue with that statement, but anyone who has wondered how to find volunteers or volunteering opportunities isn’t the first. That’s where the Creston Valley Volunteer Bank (CVVB) comes in.

Fitzpatrick created the organization, which became a society in August 2016, with the goals of matching prospective volunteers with work that suits them, supporting current volunteers and providing assistance with training, co-ordinating and recruiting.

“You’re giving of your time and you should be happy,” says Fitzpatrick. “Everyone wants a quality experience.”

Fitzpatrick has been in the Creston Valley for about two years, but has been familiar with it since her parents bought an orchard in 1987, and she commuted from Calgary to help with the harvest.

“I scheduled my entire college career around it,” she says.

She graduated with a degree in geriatric social work, and enjoyed the profession, but had to give it up when she became legally blind due to complications from a congenital neurological disorder, diabetes and an alpha 1-antitrypsin deficiency.

“I was having an issue being able to see and read body language,” says Fitzpatrick.

She had been diagnosed with diabetes at age nine, so she knew eventual blindness was a possibility. Her vision began to fade in 2001, and by 2005 she was legally blind, although she retained a fraction of her vision.

“It’s like a loud conversation, but it’s in my eyes,” she says.

When the time came for Fitzpatick to give up driving, though, she had to “lose” her driver’s licence — even after she went with her white cane in hand to an Alberta government office, the staff wouldn’t revoke her licence without a doctor’s note.

She returned to school and earned a degree in small business management, maintaining a 4.0 grade point average throughout.

Upon moving to Creston, she worked for Better at Home, and began considering a plan for seniors’ advocacy. That didn’t pan out, which led her to develop the CVVB.

Now that the CVVB is a registered non-profit society, Fitzpatrick is able to assist with obtaining criminal record checks and driver’s abstracts, so that volunteers can approach organizations with all of the necessary paperwork in hand.

She is also planning to develop a program that would allow volunteers to enjoy perks from local businesses.

“It increases the businesses’ foot traffic, and is an incentive for volunteers,” says Fitzpatrick. “Most places that use volunteers can’t afford to do anything for them and that’s the gap I’m trying to fill.”

On top of that, she plans to run workshops on subjects including efficient boards, B.C.’s Society Act, and personal and professional development. However, with Fitzpatrick as the CVVB’s only staff member, it isn’t all happening at once.

“It’s a pace I can handle myself—because I’m it,” she says with a laugh.

But it may not be that way for long. The CVVB is currently operating on a $750 grant from Regional District of Central Kootenay Area B, so Fitzpatrick has created a series of colouring books to raise funds. Available at Arts from the Heart, Black Bear Books and KBTV, they contain the work of local artists.

“I’m trying to prioritize non-professional artists,” says Fitzpatrick. “They don’t get the same exposure professionals do.” •