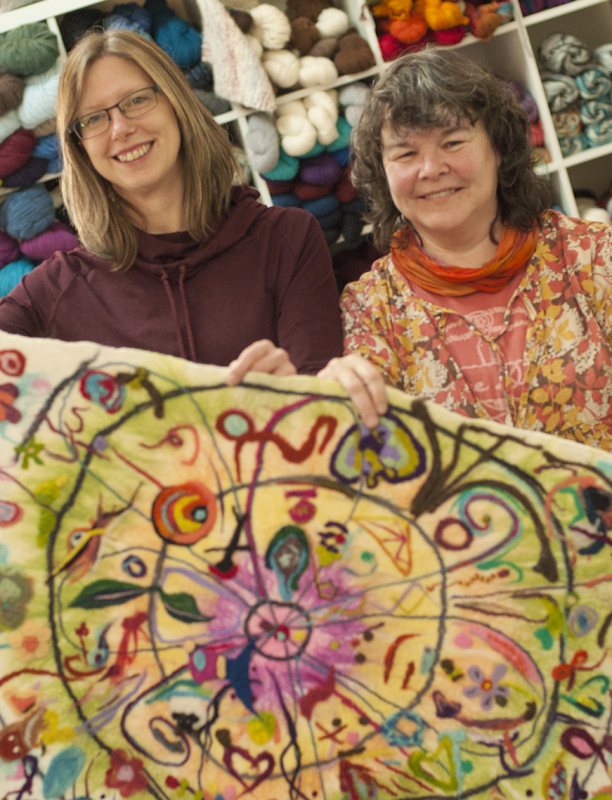 Mel Joy (left) and Carmen Ditzler, two of the organizers of the Kootenay Fibre Arts Festival, holding a piece of felted artwork created at the 2017 festival. / BRIAN LAWRENCE

Fibre in your hands isn’t simply colourful. It isn’t simply pleasant to the touch. But it is simply… there. And that’s all that really matters.

“A lot of our work in 2018 is intangible,” says Carmen Ditzler. “When we have something tangible, it fulfills something in us.”

That’s one of the reasons she organized the first Kootenay Fibre Arts Festival in 2016, and why it’s now back for a third year, running April 28 at Wynndel Hall, with the theme “Simply Blue”. She was also interested in bringing the Kootenay region’s many fibre artists together in one place.

“This festival is for building community and shaking the trees to see how many fibre artists fall out,” she says. “People’s eyes aren’t glazing over. It’s like-minded people finding people who are interested. … We have a lot of extremely talented people in the valley and it’s nice to get them together.”

The festival, sponsored by the Creston Valley Arts Council, is for more than just avid fibre artists, though. In addition to enjoying a gallery and fashion show, newcomers to the world of fibre will have the opportunity to buy carnival-style tickets, allowing them to visit stations where they may attempt skills such as needle felting, wet felting, tatting, free-form crocheting and more.

“There is a facilitator at every station to show you what the possibilities are,” says Ditzler. “I like seeing people’s eyes light up when they get it. Their head just explodes.”

Those who want to really get their hands dirty — or blue, in this case — can preregister for Indigo Jam, a workshop with weaver and dyer Gale Anderson-Palm from Rimbey, Alta., who will lead participants as they tie, clamp, stitch, resist and dye a metre of organic cotton.

“One of the things Gale always says is, ‘Happiness is blue hands,’ ” says Ditzler.

Anderson-Palm’s grandmother introduced her to sewing and embroidering at an early age, and she later explored weaving. She studied indigo at Alberta’s Olds College, and travelled to Japan in 1988, studying the techniques of ikat and shibori at the Kawashima Textile School in Kyoto. She has since taught and studied in Nepal, Tibet, India, Peru, Mexico, France, Bhutan and Morocco.

The indigo artist will be the festival’s first-ever guest artist, a sign that the festival is growing, and the reason Ditzler brought in others to help out, including Fly in the Fibre owner Mel Joy, whose business has become a fibre artist hub — which helps feed her own passion.

“I took a class and then just kind of fell into the rabbit hole,” she says. “Once I started learning about fibre, especially natural fibre, there’s a lot you can do with it.”

She’s particularly fond of knitting, appreciating the feel and colour.

“It’s definitely the working with your hands,” she says. “And every project is challenging. It doesn’t matter if you’ve done the pattern before, it’s always different.”

And if the design isn’t turning out the way it should, it can be changed. 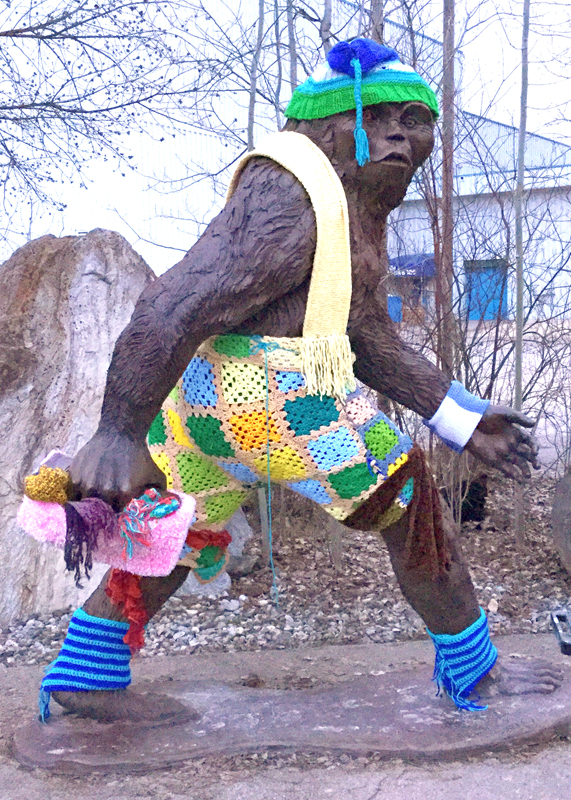 As many grandmothers do, Ditzler’s tried to teach her and a cousin to knit when they were kids. They just wanted to play outside, though, so Ditzler waited until she was living in northern Alberta years later to teach herself. She later joined the Sheep Creek Weavers and Fibre Artists Guild and discovered just how far textiles could take her.

“It’s just a rabbit hole, and then it explodes underneath,” she says.

Her favourite fibre art is wet felting, in which layers of wool are combined to create a flat piece of felt fabric, using hands, water and soap.

“The possibilities of what you can do with it are endless,” she says.

That has helped fibre art to make a comeback. Spinning and weaving, Ditzler says, were popular in the 1970s, while knitting, usually with artificial fibre, was just something grandmothers did. But the ability to share ideas and techniques through the Internet created a renaissance for knitting and dyeing.

“A lot of our work is intangible and unsatisfying,” says Ditzler. “People like working with their hands. People like colour. You can justify what you do because it’s practical.”

It’s also accessible, requiring little equipment, a great deal of which can be found in the vendor area. Last year, supplies included local fibres from Skimmerhorn Alpacas and Spectrum Farms.

“It’s not a finished goods event,” says Ditzler. “You can go and get stuff to knit or weave or felt or dye.”

Of course, there will be some finished goods to see, with a gallery set up to display artists’ work.

“It can be the first thing you made,” says Ditzler. “It’s not there to be a competitive; it’s there to be supportive.”

It’s also a chance to commiserate on the challenges of the creative process.

The festival will also have an art challenge and a hat challenge; Fly in the Fibre will host a class in April to help contestants prepare for the latter.

Add it all together and the festival is a place where fibre artists, whether veterans or newcomers, can enjoy a chance to socialize, learn and play.

“People that came had a great time,” says Ditzler. “They get interested in doing something they’ve never done before. … People show up that work on their own and find that other people like the thing they like.”

“It’s a safe environment without your mom or grandma or teacher looking over your shoulder,” adds Joy. “It brings out the artist in people who didn’t know they were artists, which is kind of neat.”

•Admission to the Kootenay Fibre Arts Festival is free, and guests can pre-register for lunch. Learn more at www.flyinthefibre.ca/pages/kootenay-fibre-fest. 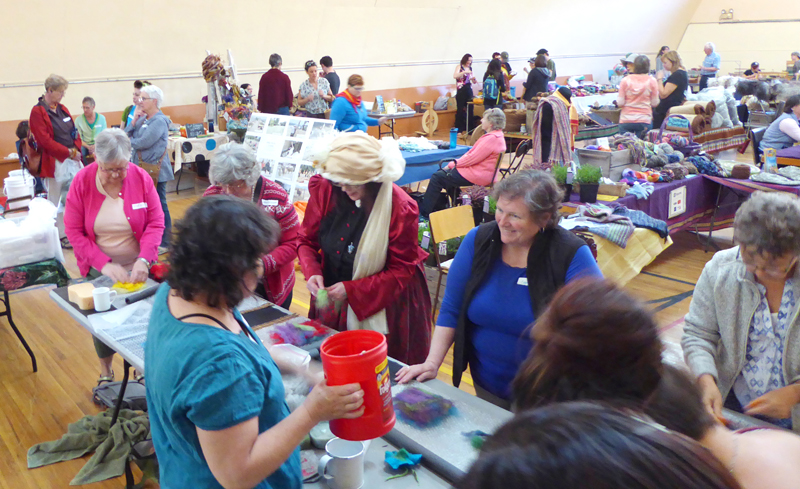