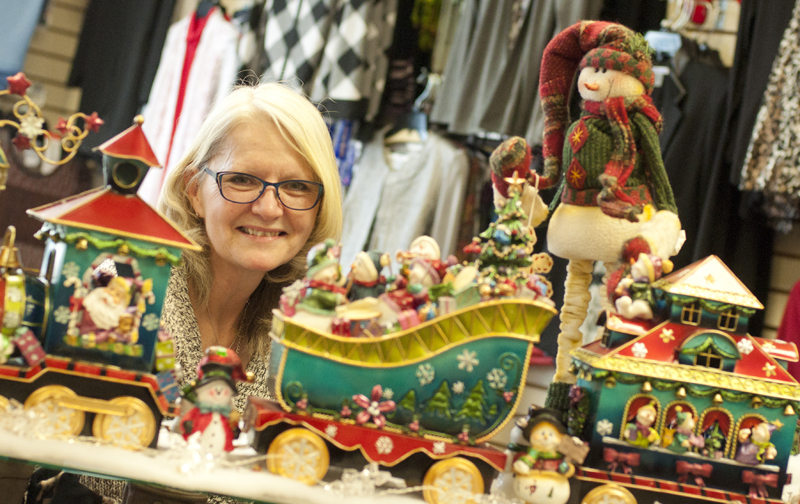 In what has become a Christmas season tradition, Sue’s Clotheslines is donating to the Creston Ministerial Association’s Christmas hamper drive, this year handing over a cheque for $4,340.

Since 2013, the store has donated $13,599.76 to the hampers. Raising those funds takes a lot of time and effort — including two days to decorate the store, and a year of gathering auction and sale items — so why go to the trouble?

“The fact that someone gets a Christmas dinner and doesn’t go to bed hungry,” says owner Sue Thomas. “Sometimes, situations put people in a place they want to get out of but can’t.”

The Christmas hamper program, which annually provides hampers filled with food, books, toys and more to over 400 families, costs about $20,000 each year, with any additional funds used throughout the year, assisting community members with expenses including dental, medical and utilities.

Many of the silent auction items are clothing, about $4,000 of it provided by Thomas’s suppliers. Local businesses and organizations have also donated to a few gift packages.

“We want to promote what we have locally,” says Thomas, who has owned her store for 15 years. “There are a lot of people who don’t even know what there is in the valley.”

An orchard basket included local honey and asparagus, and an “out and about” basket had a night’s stay at Ainsworth hot spring, golf passes and Footlighters Theatre Society tickets. Thomas and Kusiak collected all year to create a gardening basket.

“Any time we saw something, we bought it and stuck it in a basket,” she says. “And Morris Flowers helped with that, too.”

While the auction is running, bids are placed in the store window, and some bidders keep a close eye on the numbers. 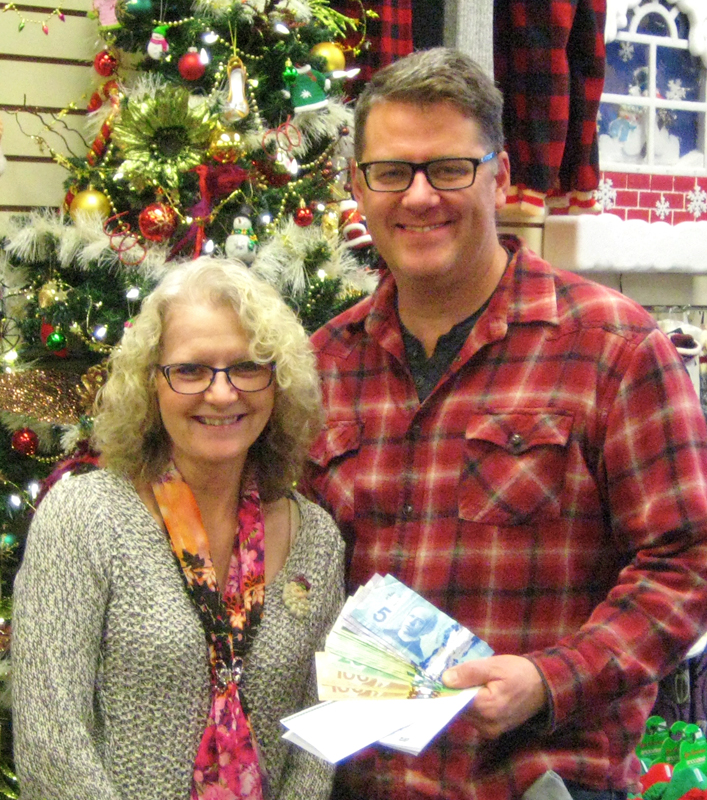 “If they see that their bid is down, they come in and up it right away,” she says.

To donate funds throughout the year that the store matches at Christmas, customers can purchase pocketbooks and crafts, or donate their spare change to Heavenly Cents (an inverted umbrella above the counter). For this holiday season, Sue’s is also offering snowmen as a fundraiser.

Fundraising all year is a way to keep the Christmas spirit going strong — and seeing how much effort they put into decorating the store, it’s no surprise that Thomas and Kusiak love that spirit.

“It makes everyone smile,” Thomas says. “Unless you’re Scrooge — and he got turned around — it’s a happy time of year.

“I collect snowmen and you don’t see an unhappy snowman. It definitely brings the good out in people.” •

(Editor’s Note: This story has been updated from the version that appeared in the Season’s Greetings section of our December 2017 issue, which went to press before Sue’s Clothesline’s 2017 donation total was known.)