Chad Wobshall (right) with (from left) his wife, Jessica, and their children, Briley and Hailey.

Nightstands. Entertainment units. Wine racks. Serving trays. One downtown Creston store offers them all, and with a rustic design found nowhere else.

“People don’t really see stuff like this,” says Kootenay Crate Co. owner Chad Wobshall. “Unique and handmade is the draw. … People are a little bit sick of Ikea furniture — you get it home and put it together, and it’s all particle board.”

Kootenay Crate Co. follows a different philosophy, though, with wood assembled and stained by hand, a process that customers appreciate.

“People have bought into the brand,” says Wobshall. “They want the Kootenay crate.”

The distinct style has earned the company a following outside the Creston Valley, with photos on social media receiving thousands of likes and shares, even in its early days.

“That’s where the business basically got its legs,” says Wobshall.

It all got started in 2014 when he and his wife, Jessica, visited yard sales and bought crates, which they stained and started selling in groups on Facebook. When Wobshall decided to try his hand at making his own crates, he was fortunate to be working at the WynnWood sawmill, which allowed employees to take home scraps.

“I had my buddies coming out with an armload every day,” he says.

It progressed naturally from there, and Kootenay Crate Co. has since turned out over 12,000 pieces since.

“We never forced anything. … They come from people’s ideas,” says Wobshall. “We don’t want to get too crazy. We have more luck doing what people ask for — we do a couple of them and see what happens.”

For example, a customer who needed something to hold records led to the creation of LP-sized crates. 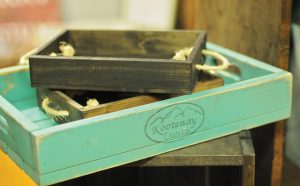 Some of the available products at Kootenay Crate

Other businesses have found the crates useful, as well, taking advantage of their versatility to create commercial displays for trade shows.

“They pack stuff in crates and then set them up.”

Wholesale orders are also a big part of the business, with such stores as Leon’s Furniture in Lethbridge, Alta., and, closer to home, the Bedroom Furniture Galleries in Cranbrook offering the wood products. On occasion, customers spotting the crates elsewhere appreciate the chance to check them out while visiting Creston.

“People see them in stores, and they come to town and say, ‘I want one,’ ” says Wobshall.

The business had no storefront until he started a shop on Northwest Boulevard in April 2015, eventually moving downtown six months ago. The change created a significant increase in traffic.

Developing a business was important to Wobshall, who was born and raised in Creston — and didn’t want to leave.

“I’ve always known I wanted to stay in Creston,” he says. “All my friends in high school wanted to leave, and I just wanted to stay and get a foothold so I could afford to stay here.”

The colour names for his products reflect his passion for the Creston Valley, with Mount Thompson, Kokanee, Sam Steele, the Canyon trestle, Goat River and Twin Bays among the namesakes.

“A lot of people will quote the names when they order something,” he says.

Most customers don’t like to get too wild with colours, though; neutral tones are consistently popular, with interest in red climbing around Christmas. When creating storage units, many will opt for a natural colour for the base, adding coloured crates for a pop.

The Kootenay Crate Co. shop isn’t filled only with crates. Work by a few other local artisans — all in a complementary rustic style — is also offered, and Wobshall’s crates are a base for words and images by Howard and Rose Elliott of Rook Media/Design.

“People come in for a crate or a sign — or a crate with a sign on it,” says Wobshall.

“You might not buy something, but it reminds you to go back,” he says.

While the Kootenay Crate Co. creations don’t seem to be losing popularity, Wobshall says that his style may have to adapt as time goes on.

“People are going a little bit away from rustic and going toward industrial.”

But if that keeps the creative juices flowing, he’s happy to head for the workshop and try something new.

“When you do something outside the box and completely new, that’s cool,” he says. “What drives you is the creative aspect. … If you want to be more positive, you hit the shop and get your jam back.”