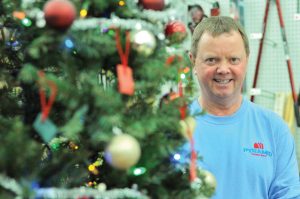 Dale Moberg with the Wishing Tree he and his wife, Kelly, started at Pyramid Building Supplies in 1992.

The Wishing Tree at Pyramid Building Supplies isn’t put up and decorated until after Remembrance Day, but that doesn’t stop generous members of the community from anticipating the Christmas spirit it creates.

“People phone at the beginning of November wondering when we’re putting the tree up — they’re wanting and waiting to give,” says Pyramid co-owner Dale Moberg.

This is the 25th year for the tree, which allows the public to buy children and teens gifts that are distributed in the Creston Ministerial Association’s annual Christmas hampers. The process is simple: Visit Pyramid, pick a tag off the Wishing Tree, buy a present for the age and gender on the tag, and then return it unwrapped to Pyramid, this year by Dec. 10.

The idea was inspired after Moberg and his wife, Kelly, attended a trade show in Vancouver, where a motivational speaker urged attendees to become more involved in their communities. The inspiring words were all they could think about on the trip back to Creston.

“We had an eight-hour talk about how we could step up and help out,” says Moberg.

It wasn’t a stretch for them to focus their efforts on children.

“We love kids,” says Moberg. “I coached young kids’ softball for six years while my daughters were growing up. This is our third year of coaching curling. I love putting a smile on kids’ faces.”

About 150 gifts were donated in the first year, and the average had hovered just over 200 since.

“This community is such a fantastic community that way,” says Moberg. “It’s very, very giving.”

Moberg is no stranger to helping out the less fortunate — he’s been doing so since he was young.

“I’ve always had a soft spot for the needy,” he says. “As a child, I always passed my lunch around to others who needed it.”

A few regular donors participate each year, including one woman who brings in stuffed bears. One man buys gifts for older children and teens; the demographic is more difficult to buy for, so donations for those ages tend to be fewer.

“He comes through in a big way.”

And if anything is still needed by the time the collection period is finished, the many cash donations are given to Pyramid are put to good use.

Whatever’s lacking at the end, we’ll pick up ourselves,” says Moberg. “We make sure all the boxes are full.”