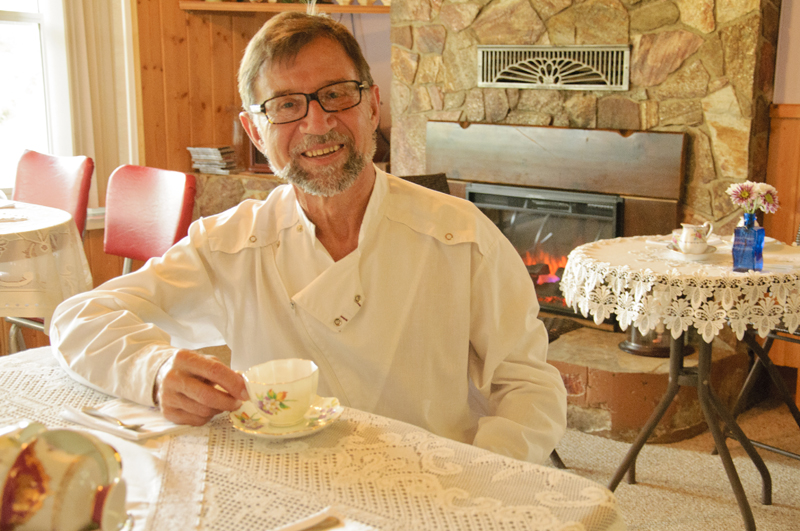 For a unique experience that evokes a simpler time, look no further than Riondel, where guests can enjoy a refreshing visit to Simply Simon’s Tea Room.

“It’s part of an era that is almost fading in this world of fast food,” says owner Simon Lazarchuk. “Tea goes back to a time when you took a break from the trials of the day to refresh yourself.”

It appears to be the kind of break locals are looking for — customers kept Lazarchuk busy all summer after he opened the tea room in July 2016.

“I was blown away,” he says. “The first season was absolutely an overwhelming success.”

And why wouldn’t it be? The menu offers two kinds of scones (cream, with fresh fruit and Devon cream, and Scottish, with homemade preserves and Devon cream), a tiered server of sandwiches, savouries and sweets, and, of course, a selection of teas, including Ceylon, pekoe and Earl Grey, and the more exotic caramel rooibos and strawberry champagne, mixed at a tea shop in Nelson. It’s served on Lazarchuk’s vintage china in an inviting room — with walls painted to match the peony flowers in the backyard — with music playing and a fireplace adding a particularly homey touch.

It’s a new twist on an experience that customers previously enjoyed at the popular tea garden Lazarchuk ran at his Canyon home for six years before moving to Riondel with his husband, hairdresser Henri Roberts, in 2015. The Riondel location doesn’t have the levels and pools of their Canyon property, but they realized soon after relocating that the new home’s view of Kootenay Lake had to be shared.

Raised north of Edmonton, Alta., Lazarchuk studied fine arts at the University of BC in Vancouver.

“I went to Vancouver to become a star, only it didn’t work,” he says with a laugh.

He obtained a recreational rehabilitation degree in the early 1970s, and worked as a dancer and recreational therapist, continuing in both roles after moving to Creston in 1989.

Physical disabilities eventually prevented Lazarchuk from working outside the home, which sparked the idea of the Canyon tea garden, where he did his own baking and turned food into artwork.

“I like making the ‘wow’ presentation and the reactions I get,” he says. “I’m a choreographer — I set the stage and dance my way through it.”

For some customers, a visit to Simply Simon’s is a chance to relive an experience they may have had elsewhere, and is something all ages enjoy.

“It’s something they haven’t had since the last time they went to Victoria or Kelowna, or visiting relatives back east,” says Lazarchuk. “It’s something different to come and socialize with friends in a place that’s not a pub. Some actually come dressed for the occasion in summer frocks and big hats.
“We’ve had young couples come with kids. We put the kids at a separate table where they got to order what they wanted, and it was delightful.”

And quite a few people from Creston, he says, are happy to turn a visit to Simply Simon’s into a day trip, enjoying everything Kootenay Lake’s East Shore has to offer.

“They often get together with a carload and come out,” says Lazarchuk. “It’s a lovely drive and a destination. You can have a lovely tea and stop at the shops in Crawford Bay, and decide to have dinner at the Rockwood Cafe on the way home.”