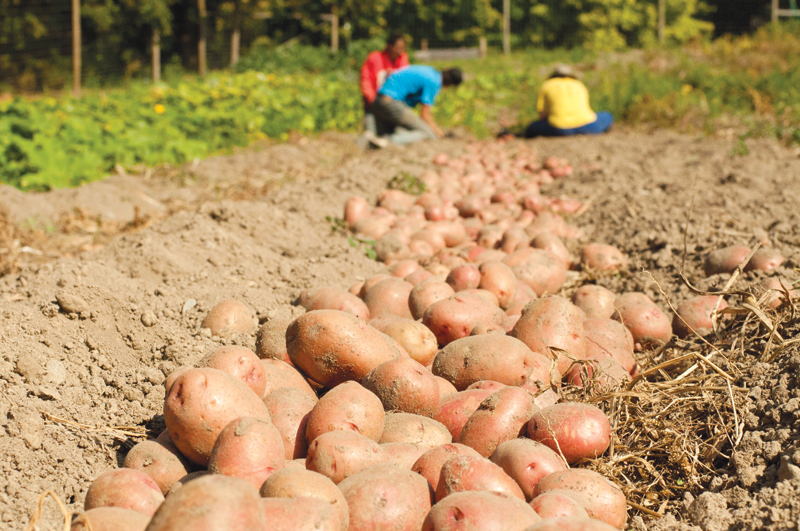 With livestock and produce abundant and easy to see, Spectrum Farms may seem like many others — at first glance, that is.

But what truly makes it unique? The farm is a social enterprise of the Kootenay Region Association for Community Living (KRACL), and as a supportive employer, the farm’s workers are all people with disabilities — any type of disability — given an opportunity to earn their own income, a chance not always afforded their peers.

“I’m devoted to improving the standard of living for people with disabilities,” says manager Denis LaRose.

Some people with disabilities may live on provincial funds of about $900 a month, while their seasonal work at Spectrum Farms may earn them an additional $3,500-$4,000. 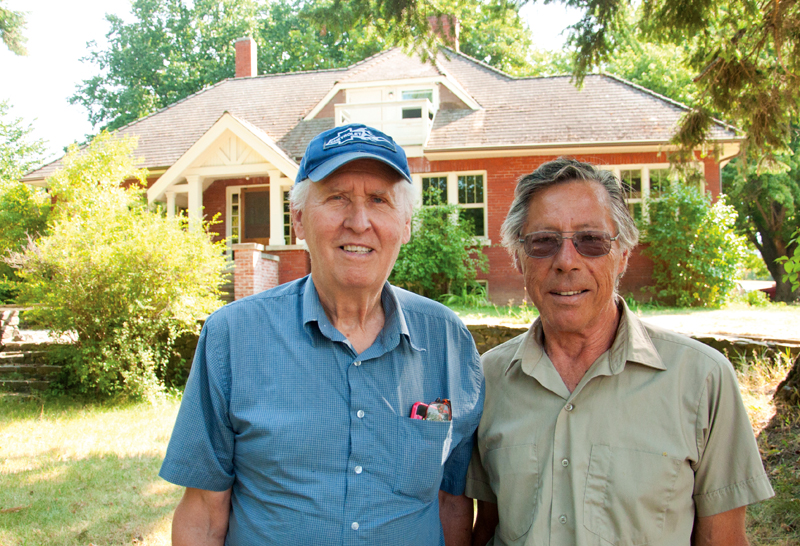 “That will give them a base for the rest of the year,” says Eric Kutzner, who recently completed a five-year volunteer stint as manager.

“It improves their self-esteem,” adds LaRose.

He moved to the valley in 1991, working as a parole officer for southeastern B.C. He had previously been the executive director for a community living organization in Dawson Creek, and had worked at New Westminster’s Woodlands Institution.

“My dream was to integrate people with disabilities into everyday life,” says LaRose.

When he moved to the Kootenays, he bought an acreage in Wynndel, starting to grow plums, then switching to apples. He sold the Wynndel property and bought a farm and fruit stand in Erickson in 1996, running Under the Apple Tree for 14 years.

“I had a passion to grow things,” he says. “To this day, I have no idea why it was so ingrained in me.”

LaRose found that growing things is physically, emotionally and spiritually empowering — which made it easy for Kutzner to recruit him as a volunteer in 2013 — and he hopes to pass on that passion to the farm’s workers.

“It’s so challenging,” he says. “It keeps you on your toes.”

Spectrum Farms has 12 employees, each working up to 20 hours a week, both in the farmyard and in the kitchen, baking and making products such as jam and dehydrated fruit, which stock the farm’s Going Green Market. It also offers low-income housing for people with disabilities; an upcoming project by BC Housing and the Columbia Basin Trust will create units for nine. 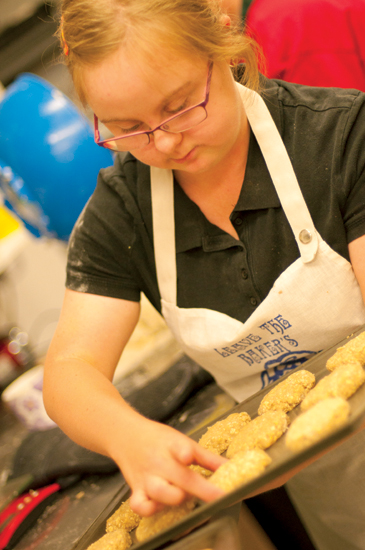 The bustle of activity has been growing for five years at the farm run by KRACL, which grew out of the Kootenay Society for Handicapped Children (KSHC) started by Trail’s Dr. William Endicott in 1951.

“He believed that children diagnosed with mental conditions had the potential to learn life skills necessary to live outside of institutions, given proper supports,” says Kutzner. “The dream was to keep children in the Kootenays and offer them an opportunity to develop their potential.”

Endicott started a day school in Trail, with KHSC chapters eventually established in Nelson, Kimberley, Creston, Cranbrook and Castlegar. The society set out to create a custodial home and residential school, and bought a 14-hectare Alice Siding property in 1961. A year later, it sold the property and purchased the Archibald estate on Erickson Road, naming the facility the Dr. Endicott Home and School.

Through co-operative funding efforts between the six KSHC chapters, a dormitory housing 30 children was completed in 1965, with an adult residence and day program following in 1970. In 1972, vocational training started, and three years later, KSHC changed its name to Kootenay Society for the Handicapped, reflecting the services it provided to both adults and children. In 1977, the facility was renamed the Endicott Centre.

The 1980s saw the closure of many B.C. institutions, with the public school system taking responsibility for the education of children. The Endicott Centre’s adult residents moved into their own homes and apartments, while younger residents moved in with foster families. 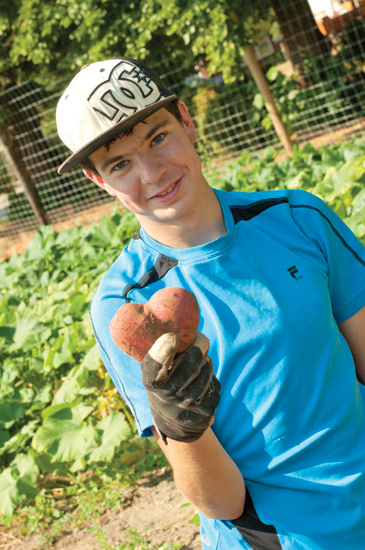 The society became the Kootenay Society for Community Living in 1989, 10 years before the Endicott Centre finally shut its doors. The organization remained, though, with other regional community living societies as members, finally becoming KRACL in 2005.

After the centre’s closure, the property, which included the two dormitories and the 4,000-square-foot Archibald House, sat mostly vacant — a wellness centre and salon were among occasional tenants — for well over a decade.

“The property was busy sitting here deteriorating into nothing,” says Kutzner, who serves as KRACL’s treasurer.

He and his wife, Donna — one of about 20 volunteers at the farm — retired to Creston 13 years ago, and Kutzner, who has a strong accounting-financial background, was quickly recruited by well-known Creston Valley volunteer Alex Nilsson to become involved with KRACL, the Creston and District Society for Community Living (CDSCL) and the CDSCL’s Therapeutic Riding Program. Through those interactions, he discovered that KRACL had no goal or vision for the property.

“We’re not a caregiver,” says Kutzner. “We’re a supportive employer.” 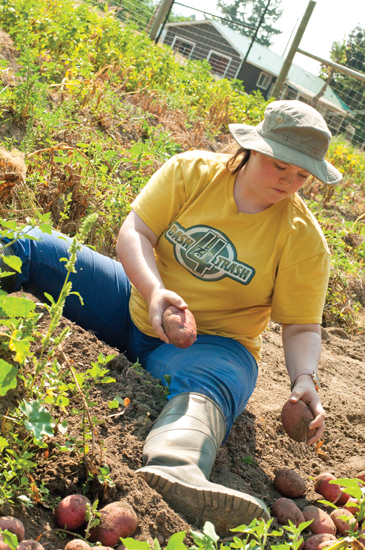 The former Endicott Centre land was, with Regional District of Central Kootenay approval, rezoned from agricultural to community service use, to allow for up to 15 residents. KRACL sold four hectares of land, allowing it to commit $200,000 of its own funds — with $600,000 in grant funding added for the reconstruction of building and infrastructure — to what ultimately became a five-phase plan.

Phase 1 involved raising chickens and establishing a market garden. Some of the farm’s 10.5 hectares aren’t suitable for growing produce but makes for excellent pasture, so sheep were added in the spring of 2015. Lambs are sold to cover wages, as none of the grants obtained are used to subsidize operations, and raw wool is sold to local fibre artists. The farm recently bought a used carder to process the wool, something that is needed in the B.C. Interior.

“As we started to grow, we could see there was a market for that,” says Kutzner. “We have lots of letters of support from growers and people who produce wool.”

A second phase is to create a shop for small engine repair and craft woodworking. KRACL is seeking funding to complete this by March 2018.

Phase 3 involved developing Archibald House into a four-bedroom bed and breakfast and agri-tourism retreat, a project that was completed this year, funded by WorksBC and the federal government. It won’t be open to guests right away, though; the tenants currently residing in the former children’s dormitory will live there while the next phase is completed. BC Housing and the Columbia Basin Trust are funding that fourth phase, which will see the dormitory torn down to the floor next year, and then rebuilt to contain nine independent living suites for low-income people with disabilities. During construction, current tenants will live in Archibald House.

The fifth phase was completed this year, with the opening of a general store, the Going Green Market, this year. It replaces the weekly outdoor market Spectrum Farms used to host, and offers a permanent location to sell fresh produce and raw wool, as well as value-added products made on-site, such as baking, dehydrated and frozen fruit, soup mixes and canning.

The products sold are part of the farm’s endeavour to encourage food security in the valley, although they are priced competitively so as not to compete with producers who make a living with similar items.

“We don’t want to negatively impact the market,” says Kutzner. “We don’t try to undersell other people.”

With some of the phases complete and others well underway, Kutzner is looking forward to taking a step back, although it won’t be an end to his involvement with the farm.

“I’m honestly glad for some help,” says Kutzner. “It’s been a challenging five years. Not that I don’t enjoy every minute, but there have been challenges, particularly around construction.”

“It’s always evolving,” says LaRose. “We keep adding responsibility, not taking it away.”

All of the hard work, however, brings Spectrum Farms one step closer to being an even more outstanding representation of a supportive employer, making sure the needs of each workers are met in a way that best suits him or her.

“Our role is to try to tailor every job to the person’s ability,” says Kutzner.

“And at the same time, challenge them to go further,” says LaRose. •

The Kootenay Region Association for Community Living is a registered charity and welcomes donations. To donate or learn more about the organization, visit www.kracl.org. 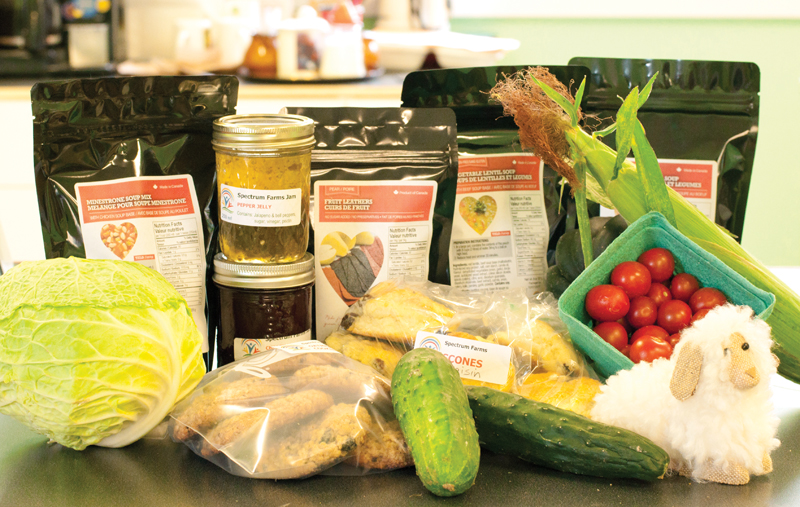 A small sample of the produce and products available in the Going Green Market at Spectrum Farms. /BRIAN LAWRENCE