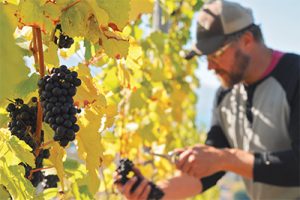 “We just about sold out the first weekend,” says Mutch.

“Our town is very supportive of it. We’ve been to lots of markets and Creston is one of the top, by far,” says White, a dental assistant who, like Mutch, was born and raised in the Creston Valley.

Their product line has expanded since, now including vinegar, drinking vinegar, fruit spread and hard cider, the latter debuting in December 2015, after two years of planning.

“It was the end goal, but we didn’t go all the way then without knowing how it would pan out,” says Mutch.

William Tell offers two hard ciders — Apple Crisp and Long Shot, made with apple blends — which are still rather than carbonated, and a perry, Pearalizer, made with Anjou pears.

The business grew out of Mutch’s passion for agriculture, which started when he was a child.

“When they used to pack apples at the packing house, I went out there with Ron Hug,” says Mutch. “They were family friends, and they had a big apple farm in Canyon.”

When visiting the farm, Mutch would help scour the orchard for culls, which, at the time, could be sold to Sun-Rype.

In Grade 8, he began working for Chuck and Elaine Truscott, and continued to do so in the summers after he left Creston in 1997 for college in Alberta, where he earned a horticulture degree. In 2001, Mutch began working as a vineyard technician at West Kelowna’s Mission Hill Family Estate winery, which brought back memories of home.

“I always thought we could grow some grapes in the Creston Valley,” he says. “Even when I was working at Truscotts’, I thought somebody should be making cider.”

He didn’t expect that somebody to be him, though, intending to spend a couple of decades at Mission Hill before retiring to Creston. But he returned to Creston sooner than expected, becoming an inspector for the Canadian Food Inspection Agency (CFIA), as well as buying eight acres on an Erickson hillside. At an elevation of 640-700 metres, JRD Farms is the highest vineyard and orchard in B.C.; facing southwest, the location allows full sun exposure for apples, peaches, pears, plums and prunes, apricots and pinot noir grapes, as well as cherries, which are planted but not yet producing.

“I always thought it would be ideal, with the sloping aspect,” he says. “I just drove in there and I said, ‘I’ll buy it.’”

Mutch and White started selling gallon jugs of cider, and when Mutch lost his job in 2012 due to CFIA budget cuts, they took the plunge into sparkling cider, then under the William Tell Juice Co. label, the name derived from the Swiss folk hero who allegedly shot an apple off his son’s head on Nov. 18, 1307.

“We ferment the juice, then add mother of vinegar, a natural bacteria like SCOBY (symbiotic colony of bacteria and yeast) on kombucha,” says White.

The initial plan was to keep the apple and pear flavours separate, but in the end, they combined them for a unique taste.

“When it came down to crunch time, we threw them together, and made one label instead of two,” says Mutch.

From there, it wasn’t a stretch to create drinking vinegar, a concentrate used in cocktails and mocktails. Among the William Tell offerings are apple pie, flavoured with cinnamon and vanilla (it goes well with darker liqueurs, or with warm apple juice and amaretto), and black cherry (perfect for vodka and fresh mint), made with cherry juice from the Loca Orchard Juicing Company.

Of course, the question remains: What is the difference between cider and juice? There isn’t one, technically, but the William Tell product is cider rather than juice because it’s certified through the Interior Health Authority; it could be juice if it were federally certified. For the same reason, Mutch and White produce apple-pear fruit spread, rather than jam.

The fruit at JRD Farms is all grown with minimal spray and pruning, and Mutch and White will be adding more to the mix, with Cox’s orange pippin, Newtown pippin and red Gravenstein apple varieties among upcoming cider ingredients.

Whatever the future holds, they’re sure their loyal customers will be lining up for a taste.

“Every time there’s a new product, the response from the community is good,” says Mutch. “At first, I think people were just buying it to help us out and support us, but now they’re buying it because they enjoy it.” •