Ducks Roaming Free at Wynndel’s Quack Me Up 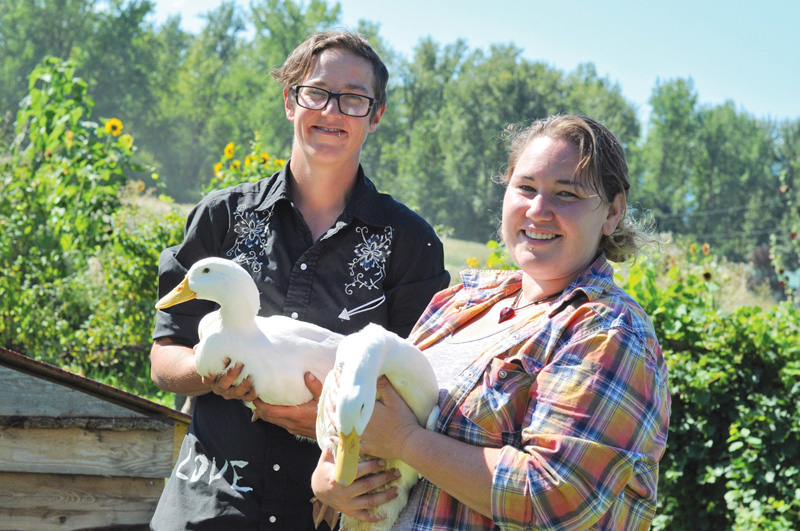 “I just love being a duck farmer.”

It was a random text from Tammy Murphy to business partner Jessica Piccinin, but a simple way to express her feelings about their latest venture.

“There’s really just not a day where they’re not making me smile,” says Murphy. “They’re just adorable and ridiculous.”

With nearly 300 eggs to collect every day from 14 varieties of pasture-raised ducks, smiling is almost guaranteed for the owners of Quack Me Up, who are already keeping busy with other agriculture-related businesses.

In Wynndel, Piccinin owns Root and Vine Acres, producing vegetables, fruit and meat, and the Walking Olive Tree, creating smokies. And in Yahk, Murphy deals with Quack Me Up’s hatching and breeding stock, and runs the Rabbit Tree, a rabbitry, with her partner, Jodi Bults, who is studying to be a butcher and worked for Piccinin.

“It’s amazing how it came together like that,” says Piccinin. “Basically, all we’re going to do is feed the valley.”

And they’re feeding customers a healthier product. Duck eggs form alkaline instead of acid, which can make them suitable for people with irritable bowel syndrome or those undergoing cancer treatments. They also have higher protein and iron, and more good fats and fewer bad fats than chicken eggs.

A woman at the Nelson farmers’ market said she hadn’t eaten chicken eggs for five years, so Piccinin gave her a sample of duck eggs to try. 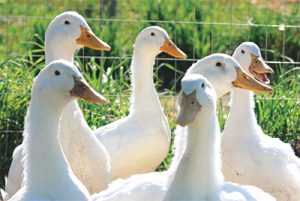 ducks roam free in at Quack Me Up

“She’s one of our best customers now,” says Piccinin.

With a yolk twice the size of a chicken egg, duck eggs react differently when cooking or baking.

“When you bake with a duck egg, it has a lot more loft, and just rich, velvety deliciousness,” says Piccinin, adding that even an overcooked duck egg maintains a velvety texture.

Quack Me Up was started in the Slocan Valley in 2011, and original owner Mee-len Dickie put it up for sale in late 2015. But she wasn’t receiving any suitable offers.

“She had a lot of people contact her, but they were like, ‘I’ll buy incubators,’ or ‘I’ll buy a couple of ducks,’ ” says Piccinin.

Dickie messaged Piccinin on Facebook, so she decided to take a look, which proved to be timely.

“The day before I went, Tammy was over with Jodi and said she didn’t want to go back to work tree planting,” says Piccinin. “She said may be she’d start a hatchery.”

Three weeks later, they were the proud owners of 362 ducks, which they brought over the Kootenay Pass — in January — on a few trucks loaded with cages. All of the ducks made it safely through the journey, but immediately started a six-week moult and stopped laying, giving Murphy and Piccinin time to prepare.

“If we had 300 eggs a day, we wouldn’t have known what the heck we were doing,” laughs Piccinin.

They figured it out quickly, though; farming is in their blood.

Murphy’s family farms on Prince Edward Island, and she grew up on a hobby farm near Airdrie, Alta. Every year, her family bought a cow and a pig, and she also helped slaughter chickens, to which she is allergic.

Piccinin also farmed with her family since childhood, and after a brief detour working in the oil industry in Grande Prairie, Alta., returned to the Creston Valley and started Root and Vine Acres in Erickson in 2009, moving to Wynndel prior to last year’s growing season.

They soon found, though, that raising ducks is preferable to raising chickens.

“They’re not as aggressive with each other,” says Murphy. “They need a lot more water, and they’re messier, too. …

“They’re very much routine oriented. They like to be fed at the same time every day, and by the same person every day.”

Fourteen varieties require a bit of extra work, though, when it comes to Murphy’s end of the process.

“When it’s breeding time, they get their own pens,” says Murphy. “You keep them for two weeks like that before you start collecting eggs for hatching.”

“You can get one year out of a chicken, but three years out of a duck,” says Piccinin.

Their eggs are in demand as far away as Choices Market in Vancouver. Closer to home, Quack Me Up eggs are available at Wynndel Foods and the Creston Valley Farmers’ Market, and in the West Kootenay at Nelson’s Kootenay Co-op, Rossland’s Ferraro Foods, Nakusp’s Homegrown Market (which sells Root and Vine Acres meat) and the Kingfisher Restaurant at Halcyon Hot Springs (which serves a Walking Olive Tree smokie).

Quack Me Up also offers ducklings, and shipped 70 a week this spring to Red Deer, Alta., and Abbotsford, and Murphy and Piccinin are considering expanding to include raising geese to sell goslings in the spring. But even they’re also waterfowl, they can only be raised alongside the ducks for so long.

“They get along well until a certain age, then they get more territorial,” says Murphy.

For now, Murphy and Piccinin are happy to offer an abundance through their businesses.

To learn more about Quack Me Up, visit quackmeupfarm.com, email quackmeupducks@gmail.com