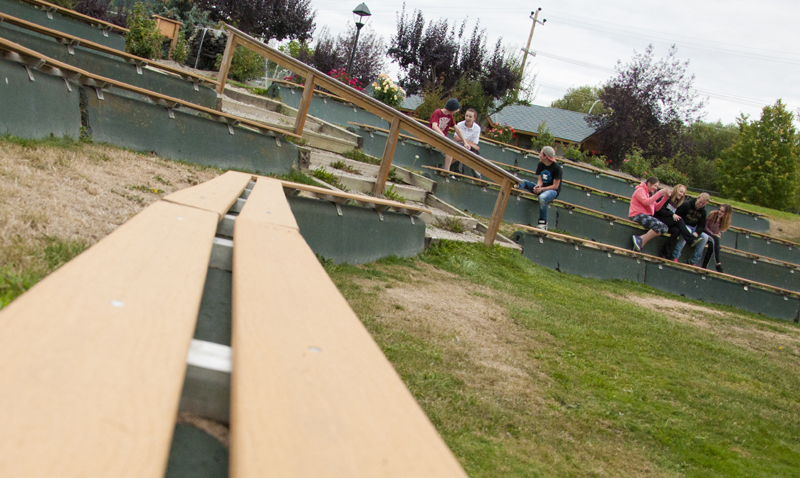 Seating in Creston’s Millennium Park is one of the Creston Rotary Club’s projects for 2017. /BRIAN LAWRENCE

It’s hard to imagine the community without Rotacrest Hall or Millennium Park’s Japanese garden, but they wouldn’t be there without the efforts of the Creston Rotary Club, which has been enhancing the Creston Valley’s lifestyle since its incorporation on Oct. 30, 1967.

Among the club’s most recent projects are the seating at the Millennium Park stage, and the Devon Street Trail (between Devon Street and 16th Avenue North), funded largely with money raised during the club’s signature event, the Rotary International Dinner and Auction, which started over 15 years ago.

“We combine it with information and presentations about international projects,” adds director Don Low.

The spring event has changed a bit over the years; with several ethnic restaurants in town, the dinner is now donated, and the auction portion grew out of the club’s former radio auction. The division of funds has stayed the same, though, with auction proceeds going to local projects and dinner proceeds helping with international programs.

That diversity has helped to attract and maintain the interest of many longtime members.

“My father was one of the founders,” says Telling, who has been a member for over 20 years. “The reason I stayed in is because we do international projects, and we have done amazing things in Honduras.”

“What kept me in Rotary were the local projects — the splash park, playground and all the different things we’ve been involved in,” says Low, who has been a member for 17 years.

Projects from recent years include the Rotary Trail on Mount Thompson, and the green gym and trails adjacent to the Creston dog park. The club has also joined forces with the Creston Valley Rotary Club, and contributed $10,000 to the new washrooms in Canyon Park, and the gazebo and washrooms in Centennial Park. The playground and splash park at Centennial Park were also joint ventures. As well, Rotary awards an annual $500 scholarship, and sponsors students for Rotary Youth Leadership Awards.

Funding for the projects comes not only from the annual dinner and auction, but also from the fall Blue Heron Half Marathon (September), rose sales (October), Christmas tree sales (December) and prawn sales (January).

Other organizations have provided support for this year’s Rotary projects, with Wildsight Creston Valley allowing Rotary to use its non-profit society status in applying for Columbia Basin Trust (CBT) grant for the Devon Street Trail project; CBT donated funds for both the Millennium Park seating — high-quality artificial wood decking on aluminum supports — and Devon Street Trail.

On the international front, the club has built water systems and schools, and provided scholarships for the people of Santa Barbara, Honduras.

“Just this last year we were the lead club on a water project that is providing clean, safe water for about a thousand people,” says Telling. “Our current wash project, if our applications for funding are approved, will provide toilets and water to about 10 schools in Honduras.”

If that pilot project is successful, the future may see Rotary International taking it on with the goal of having a worldwide impact.

“We’re willing to help anybody, not just people who are part of the group, when we see a need,” says Telling.